The Lost Army of Cambyses

In 524 BC, Persian Emperor Cambyses supposedly sent an army of fifty-thousand men to attack and enslave the “Ammonians”—denizens of the Temple of Amun in modern Siwa. Then, Herodotus tells us, this entire army vanished after a violent sandstorm.

We all love a little intrigue. A good indicator is that one of the most popular posts on my website is my companion on the Death Valley Germans which is about a family lost in the wilderness of Death Valley.

But let’s go to the ancient world. There are interesting stories of “never found.” For example—did Atlantis really exist? Was there a real Noah’s Ark? Where is Alexander the Great’s tomb? What about Genghis Khan’s?

But in this post I cover something else tantalizing. Writing sometime in mid-400 BC, the famed Greek historian Herodotus talked about the Persian invasion of Egypt under Cambyses II, son of Cyrus the Great.

Let’s look at a map first—it makes it much easier to follow the story: The red line is Cambyses’ main invasion path, and the blue is the detachment that left to Ammon. 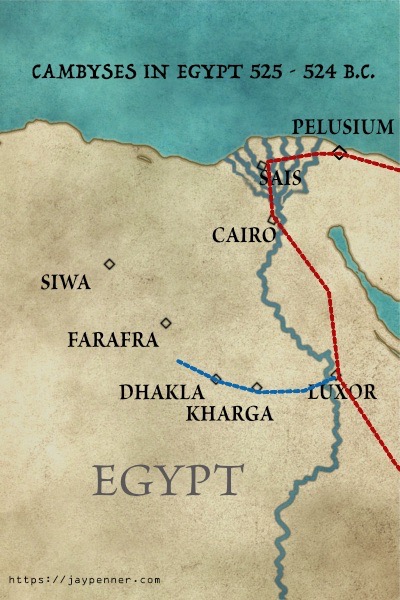 Note: At the end of this article, I provide a Google Earthy flyby which will take you to all the major locations of this tale—it’s fun, try it out!

King Cambyses (II), son of Cyrus the Great, invaded Egypt in 525 BC. He defeated Pharaoh Psamtik III (also called Psammetichus III) in the battle of Pelusium. He sought blessings of goddess Neith in the Egyptian town of Sais.

Cambyses then proceeded to Memphis (south of modern Cairo) and seized the city. After the capture of Memphis, he sent the Pharaoh (Psamtik) to exile. Cambyses then moved south to Thebes (modern Luxor).

The Persian emperor wanted to lay claim to Egypt and be legitimately granted his position as the Pharaoh. But it appears that the powerful priests at the Oracle of Ammon (modern Siwa) were unwilling to provide that legitimacy, enraging Cambyses.

At some point in 524 BC, Cambyses embarked on an invasion of Ethiopia, launching his campaign from Thebes (modern Luxor in Egypt).

According to Herodotus, Cambyses detached a contingent of fifty-thousand men and sent them to attack and enslave the Ammonians, and burn the sacred temple of Zeus-Ammon (the Oracle of Ammon or Amun). Cambyses then marched East towards Ethiopia, while this army of fifty-thousand turned West from Thebes towards Ammon (modern Siwa).

This army was last seen in the “Island of the Blessed” - though we do not know what specific location this refers to. It was apparently about seven days from Thebes. We can make certain educated guesses as to the route of this army. So, the army was last seen at this “blessed” location (which could put it somewhere between Kharga and Dakhla, assuming that was the route or maybe on the way to Farafra).

And then, Herodotus writes:

“…That the Persians set forth from Oasis across the sand, and had reached about half way between that place and themselves when, as they were at their midday meal, a wind arose from the south, strong and deadly, bringing with it vast columns of whirling sand, which entirely covered up the troops and caused them wholly to disappear. Thus, according to the Ammonians, did it fare with this army.”

We never hear of this disappeared army in any ancient sources—not by the Egyptians, or the Persians, or the Greeks. Cambyses’ successor Darius’ Behistun inscription makes no mention of it.

The army vanished from memory until the story regained some prominence in the last century under the terms “Lost Army of Cambyses” or “Cambyses’ lost army” or “Cambyses’ disappeared army” and so on.

What might have happened? Let’s look at some aspects.

Moving a large army, in unfamiliar and hostile territory, is an exceedingly complex undertaking.

It is entirely possible that this army truly began its journey from Thebes and faced some serious challenges along the way. Some readers will recollect that about 200 years after this event, Alexander the Great made a visit to the Oracle—he took a route along the coast in the North and then turned South to get to Siwa. Even though that route was shorter through the desert, it still posed great challenges. Writers say that Alexander’s army almost got lost if it were not for some divine intervention (etc.).

If Herodotus’ accounts are true, the Persians took a far tougher route, and they tried it two hundred years before.

Consider the distances: (refer to the map above, or check out google maps)

An army that followed even an approximation of this route would have to travel almost 550+ miles (800 kilometers) through desolation.

Now, if Herodotus was right, we’re not talking a hundred people or two hundred.

We are talking fifty thousand!

The most fundamental and basic need in this trip is water—if we assume about 3 liters/day/person to survive this journey (don’t forget the heat and sweating and water loss), and that they travel about 3 miles/hour and 10 hours/day (it’s fair to assume that this was an infantry move), it still puts the journey to be about 20+ days—and this is the best case. But it is rarely, ever, that simple.

If the army needed, say, 30 days, for 50,000 people, needing about 3 liters of water /day, the overall journey supply would need to be nearly ~4,500 **tons** of water (supplied multiple times along the way) not even accounting for the animals and their needs.

Or the supplies and weaponry.

Or the soldiers’ belongings (ancient armies were typically accompanied by baggage trains that included their belongings).

There are many interesting stories in the ancient world of armies attacking the opponents’ baggage trains to demoralize the troops. Two such incidents are covered in my historical thriller The Atlantis Papyrus.

The Persian army was mostly the Persians (various regions), Medians, Greeks, Scythians, Parthians, perhaps some Indians and Egyptians—which means most of the men and their commanders had little familiarity to the Egyptian desert and the frightening reality of the Great Sand Sea (which is a vast expanse of utterly desolate desert in western Egypt and into Libya).

There are many, many things that could have gone wrong. Hasty preparation, poor logistics, miscalculated distances, wrong maps, terrain surprises, lack of troop quality and preparation, potential rebellions and ambushes, desertions, and challenges from natural phenomena like storms and heatwaves.

So, let’s look at some theories about what happened.

Theories range from “it never happened” to “an army lies beneath the sand.”

It is worth noting that Herodotus is wont to depict Cambyses as a mentally unstable man, so sometimes Herodotus’ motives are suspect in the stories. Not just that, it’s all entirely possible that the Egyptians were feeding false characterizations of Cambyses and fake stories to Herodotus.

Historians acknowledge that some of what Herodotus wrote about Cambyses is almost certainly false (e.g., that he killed the sacred Apis bull). Let us not forget that the Hyksos (who squatted in Egypt around 1550 BC) were demonized by the Egyptians, though so far, there is very little evidence that these people did a lot of what ancient Egyptians said they did. I cover some of this in The Wrath of God - a tale of the Minoans and Egyptians.

There are some who speculate that the army was ambushed and defeated by renegades, and that Darius, who succeeded Cambyses, essentially suppressed the story of the defeat and replaced the tale with that of a storm.

There is a theory that they used the wrong map which showed Ammon at the wrong location, causing the army to get lost in the desert.

It is not difficult to imagine a combination—maybe it wasn’t an army of 50,000, maybe they didn’t all die in a storm, maybe they got lost, or maybe they abandoned the expedition, and the Persians (or the Egyptians) altered the story.

There are also many who question if a storm can ever be that powerful that it can bury an entire army. Sand storms in the Great Sand Sea of Western Egypt (South of Siwa) is an extremely desolate place with surprising storms. But we don’t know if one could have such awesome power.

Over the years, many expeditions have sought this army. Here is an article about two Italian brothers who said they found the army. There is also a BBC documentary/expedition that tried to find it. So far, all we have are questions and no credible answers, which makes this a very interesting subject. Egyptian authorities have been quiet about any findings, and we know little more about this lost army than we did decades ago.

To me, this is another interesting mystery from the past.

But when you think of it, even if this story was partially true, it is still utterly fascinating.

What happened to them?

Where did they vanish?

And is there truly an army of fifty thousand buried under the sands of Egypt, waiting to be found?

Whispers of Atlantis #3 of 5 343 pg.e-book, paperback
The Curse of Ammon
A standalone novel of Cambyses' lost army.
Some seek power. Some riches. But one seeks revenge.
Take a look
popular
mystery
history
if you enjoyed this, please consider sharing >

More from the blog

What's in a name? Alexander and Caesar: How their names were adopted
2m read
Why are you not doing your homework, princess?
4m read
Writing Novels and Non-Fiction with Visual Studio Code
12m read

Jay Penner writes fast-paced, realistic ancient historical fiction. His highly-rated books regularly feature in category bestsellers on Amazon. He is the author of Spartacus, Cleopatra, and Whispers of Atlantis series. Reach out to him or subscribe to his popular newsletter.