CLEOPATRA - QUEEN OF EGYPT, AND HER UNFORTUNATE PORTRAYAL

Most people have heard about Cleopatra. The glamorous seductress of Egypt, “Liz Taylor” of her times - her entire life wrapped up in a summary that portrays her either as a harlot or a glamorous temptress, whose accomplishment was basically bedding two famous Roman men and then killing herself using a poisonous snake.

It is such a travesty that this remarkable woman’s biased story, painted by clearly partial Roman writers (including Plutarch, who wrote over seventy-years after Cleopatra’s death, drawing from other sources) pandering to their local sentiments and who disliked her, has persisted for over two-thousand years.

Cleopatra died in 30 B.C., two-thousand fifty years ago. She was thirty-nine years old and queen and divinity to her people. This post is not about summarizing Cleopatra’s life, but to reflect on a few points juxtaposed with timelines. In this post, I draw parallels to certain events in her life by using time as the key indicator.

Let’s briefly touch upon how most remember her: almost nothing about her childhood, nothing about her skills and abilities. One fine day, she sprang from a carpet in front of Caesar, seduced him right away. Soon after, he got murdered, and voila, Cleopatra seduced Mark Antony successfully. Pretty soon, Antony was defeated by Octavian. She tricked Antony into killing himself, and then she committed suicide.

The thing about ancient historical portrayals is it is sometimes like our understanding of the vast distances of space. Most of us have very little appreciation for how much time elapses between events because it’s all wrapped up neatly in documentaries and tidy summaries with only a passing indication of time. And that’s why I like to use time as an important aspect to draw attention to why certain simplistic portrayals are fundamentally flawed.

Cleopatra became a joint ruler with her brother, at the age of 18, when most of us are worried about passing our next semester exams or whatever else we did at that age. She became a co-supreme ruler of an ancient and rich land that was eyed by an already expanding Roman influence, to which Egypt owed much because of her incompetent father’s missteps.

She met Julius Caesar soon after becoming queen and seduced him.

She met Julius Caesar about four years after becoming queen. Her co-ruler (her brother-husband) was younger, which meant she managed the administrative duties of a kingdom and ruled 7 million subjects in this period. She met Caesar clandestinely, taking an immense risk, because of a dangerous situation developing around her that might have had her killed otherwise.

Caesar got killed soon after.

Caesar was killed about three years after they first met. Meanwhile, she had his child and reared him. She was in Rome when Caesar was assassinated. And that means seven years had already passed between her coronation and the death of Julius Caesar.

She met Antony about three years after Caesar’s assassination (though she may have seen him as a teen when Antony was stationed in Alexandria as a cavalry officer). In fact, she met him because she was summoned by Antony to explain herself on certain matters of support and allegiance. She had been a queen for ten years already by the time she met him.

She had a brief affair with Antony.

She remained with Antony for eleven years until his (and her) death, that’s right—over a decade, bearing him three children. This was no one-night stand. She was balancing an extraordinarily difficult situation with her kingdom and increasing hostility from powerful Rome.

She was a woman whose fame was her looks, glamor, and her seduction of two powerful Romans 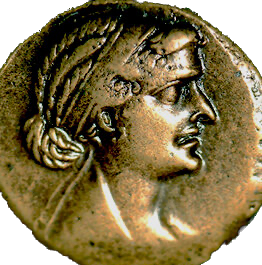 A coin made in her lifetime shows that she was not a modern-conventionally attractive woman, with her beaked nose, protruding chin, and set eyes. But it is important to recognize that sometimes queens modeled their portrayals severely to look like men.

A possible portrait made during her visit to Rome (when she was younger - 21 or 22) depicts her this way:

Source: Berlin Altes Museum Bust, most likely of Cleopatra. Found in Rome, sculpted possibly during her visit to Rome in 46-44 B.C. She wears a Hellenic diadem (symbol of royalty). Image Courtesy: Wikimedia Commons

Ancient sources talk about her beauty but none actually describe her. From coinage of the times, she was not a particularly attractive woman. They talk about her charm, wit, education, ability to convince, and ambition. But, for various reasons not covered in this article, they also demonized her heartily—how dare a woman go up against Rome and entrap its great men? It’s important to understand that everything we know about her comes from a Roman vantage, and nothing at all from Egyptian sources. Nothing. Absolutely no literature about her from Egyptian sources has survived from antiquity. Over time, with plays, paintings, and movie portrayals, she became this stunning beautiful enchantress whose power was basically seduction.

She ruled for some time / briefly.

She ruled for twenty-one years. Not just that, at her time, she was likely the only monarch who ruled the entirety of that period as the sole power. Her co-rulers were either too young, ineffective, or soon dead.

Let’s ponder for a moment: Cleopatra ruled a Kingdom for a period of five full U.S. Presidential terms. She was no little blip who rolled in a carpet and had a couple of affairs.

She managed the administration of millions, negotiated treaties, and maintained a fine balance against personal threats and external pressures, held off two ambitious Roman generals, led armies, and managed to stay on until she could no more. Whether her seduction of the Roman generals was an act of political expedience or something else is quite immaterial—it was no different from marriages of alliances and dalliances men had all the time, but it was she who bore the brunt of bad publicity and ancient roman propaganda, then magnified by flawed portrayals ever since.

That is not to say she was all roses and virtues—any study of ancient history shows a world full of treachery, violence, conspiracy, war, and conflict.

An analysis of her own family shows an almost constant palace intrigue and murder of family members—in fact, it would be unusual for a member not to dispose of their sibling, or mother, or uncle, or husband, or wife. That was her environment.

She had to be ruthless or become headless.

But in that environment, a Queen who ruled twenty-one years while managing hostility all around her was no fool, and not a one-trick pony whose only skill was seduction.

Finally, not many realize that Cleopatra was the last of the Ptolemaic dynasty. She was a Macedonian Greek who descended from Alexander the Great’s general Ptolemy, who became the satrap of Egypt after Alexander’s death, about 300 years earlier. Some aspects of that world are covered in my Whispers of Atlantis series. Here’s an interesting tidbit: All female members of the Ptolemaic dynasty had only three names — Berenice, Arsinoe, or Cleopatra! Cleopatra had two sisters, and you guessed it — named Berenice and Arsinoe.

Hopefully, more and more articles recognize her for what she was: a bright, educated, clever, ruthless, and practical woman of her times rather than a glamour figure based on simplistic, biased portrayals.

If you’re interested, my Last Pharaoh series takes you through Cleopatra’s ascendance to end, with a different treatment of the famous queen.

Cleopatra Procession Scene in the 1963 movie - how accurate?

The Last Pharaoh #1 of 3 360 pg.e-book, paperback
Regent
Journey with the famous Cleopatra in this exciting series full of twists-and-turns
Take a look
history
popular
if you enjoyed this, please consider sharing >

More from the blog

Jay Penner writes fast-paced, realistic ancient historical fiction. His highly-rated books regularly feature in category bestsellers on Amazon. He is the author of Spartacus, Cleopatra, and Whispers of Atlantis series. Reach out to him or subscribe to his popular newsletter.